New Delhi, November 10, 2017: The Suryaa, New Delhi hosted the Cake –mixing ceremony to mark the beginning of warm and cheer of Christmas. The festivity started with the cake-mixing ceremony followed by greetings from the General Manager, Mr Dhananjay Kumar and F & B manager Mr Bhuwanesh Pandey over wine and cheese. 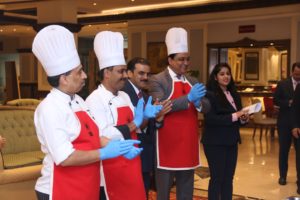 This age –old ceremony of cake mixing was hosted at the lobby to usher in good tidings and happiness. The guests were invited to be a part of this traditional celebration and were presented aprons and chef’s hats.

Patrons of the hotel and other guests along with members of the staff participated and contributed towards the large mixture. Senior Executive Sous Chef Pankaj Jha said, “The fruits are soaked for about a month, after which they are used to make the traditional plum cake and Christmas pudding. The mix has a variety of dry fruits, liquor, nuts, fruits and spices”. 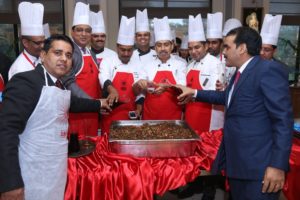 The guests enjoyed the mixing ceremony while the fragrance of different spirits that continued to linger on. Filled with camaraderie and cheer, this cake mixing ceremony not only infused fruits and wines, but also reaped in early Christmas cheer.