“Travel makes one modest. You see what a tiny place you occupy in the world.”

Travelling is luxury lifestyle and style statement for many. I love exploring new places, which are also considered World Heritage Sites or are different from the others. One such place is – Assam, which is rare compared to others and is a picture-perfect place for nature lovers.

Assam is a state in Northeast India, situated south of the eastern Himalayas along the Brahmaputra and Barak River valleys. Assam is known for Assam tea, wildlife and Assam silk. The state has conserved the one-horned Indian rhinoceros from near extinction, along with the Wild water buffalo, pygmy hog, tiger and various species of Asiatic birds, and provides one of the last wild habitats for the Asian elephant. The Assamese economy is aided by wildlife tourism to Kaziranga National Park and Manas National Park, which are World Heritage Sites along with several other wildlife sanctuaries in Assam region. 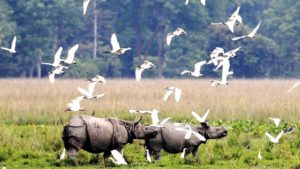 Talking about the wildlife in Assam, have you ever wondered why the state is rich in national parks, wildlife sanctuaries, rivers, green forest and so on? It’s because of its climatic conditions,-” Assam is one of the richest in the zone of tropical monsoon rainforest climate.”

The two most known wildlife sanctuaries that have been awarded as UNESCO World Heritage sites are – the Kaziranga National Park, situated on the banks of the Brahmaputra River, and The Manas Wildlife Sanctuary, situated near the border shared with Bhutan.

The Kaziranga National Park– Kaziranga National Park is one of the most sought-after holiday destinations. It is known for its conservation efforts to save endangered species like the one-horned rhinoceros in India. It is home to for more than 2200 Indian one-horned rhinoceros, about 2/3rd of their total world population. Located in the Golaghat and the Nagaon districts of Assam, this most notable wildlife sanctuary is being declared as a World Heritage Site by UNESCO in the year 1985. 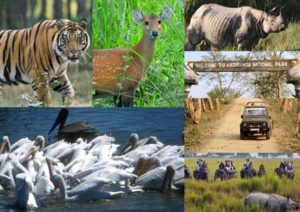 The park is the breeding ground of elephants, wild water buffalo, and swamp deer. Over time, the tiger population has also increased and it was declared a Tiger Reserve in 2006. The Park is also recognized as an “Important Bird Area” by Birdlife International for the conservation of avifaunal species. Birds like lesser white-fronted goose, ferruginous duck, Baer’s Pochard duck and lesser adjutant, greater adjutant, black-necked stork, and the Asian Openbill . 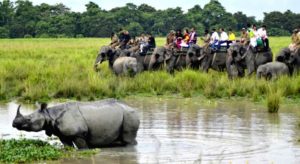 The Manas Wildlife Sanctuary– It is a UNESCO Natural World Heritage site, a Project Tiger reserve, an elephant reserve and a biosphere reserve in Assam. Located in the Himalayan foothills – the park is divided into two biomes. One is Grassland Biome that has animals like Pygmy Hog, Indian Rhinoceros, Bengal Florican, and Wild Asian Buffalo. The second biome is the Forest Biome that has animals like Slow Loris, Capped Langur, Sambar, Great Hornbill, Malayan Giant Squirrel and many other. The park boasts of 55 species of mammals, 380 species of birds, 3 species of amphibians, 50 species of reptiles. 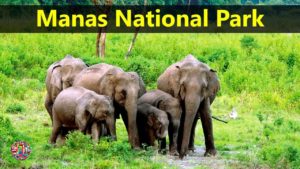 Bura Chapori Wildlife Sanctuary – It is a protected area and covers 44.06 km2, on the south bank of the Brahmaputra River in Sonitpur district, Assam. It is considered to be an ideal habitat for the Bengal florican and other mammals too. 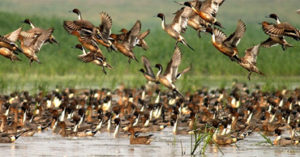 It is a treasure trove to Assam, rightly known as the Land of the Black Rhinoceros. It is a complete package of wildlife & natural beauty comprising of birds, fishes and animals that make your trip a memorable one.

Chakrashila Wildlife Sanctuary – It is famous for the golden langur and is the second protected habitat for golden langur in India. The sanctuary is mainly a hilly tract running north-south and there are two lakes.  The sanctuary has some tourist accommodation facility at Choraikhola, Kokrajhar and provides facilities for bird watching, forest trekking, and wildlife and nature photography. 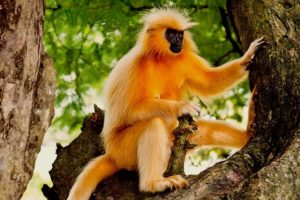 A total of 119 species of birds have been recorded in the Chakrashila Wildlife Sanctuary. This number includes three globally threatened species. The sanctuary covers an area of 45.568 km. The sanctuary has some tourist accommodation facility at Choraikhola, Kokrajhar and provides facilities for bird watching, forest trekking, and wildlife and nature photography.

The park is well connected by road, rail and air links with nearby towns in Assam. The nearest town is Tezpur at a distance of 32 kilometres.

Assam has many wildlife sanctuaries situated around its border, to name a few –

Assam’s wildlife packages are the best holiday destination for all nature & wildlife lovers. The sanctuaries are well connected and transport is easily available, as for lodging the forest areas have their own rest house, one needs to book before they reach if they are travelling during the peak season(s).

So what are you waiting for? Book your ticket(s) to experience something you haven’t experienced yet!