Motivate behind Holi– Celebrate Holi keeping in mind its purpose of ‘uniting people’ and ‘a victory of truth over evil.’ 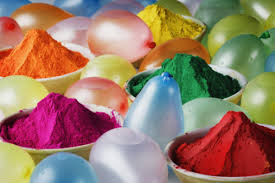 Foremost is the legend of  Prahlad and Hiranyakshyap.

Holi also celebrates the legend of Radha and Krishna which describes the extreme delight,

Holi is the celebration of death of Ogress Pootana who tried to kill infant, Krishna by feeding poisonous milk to it.

Extremely popular in Southern India is that of Lord Shiva and Kaamadeva. According to the legend, people in south celebrate the sacrifice of Lord of Passion Kaamadeva who risked his life to revoke Lord Shiva from meditation and save the world.

The legend of Ogress Dhundhi who used to trouble children in the kingdom of Raghu and was ultimately chased away by the pranks of the children on the day of Holi.
Showing their belief in the legend, children till date play pranks and hurl abuses at the time of Holika Dahan.


Use a hat, cap or anything like that to protect your hair.


Use Sun glass to protect your eye.

Apply Oil on hair & Skin-you can slip away easily, and the colors won’t stick!

Keep handy pain killers, anti-oxidants, anti-allergic tablets if all the above tips have been disregarded.

Refrain  from too much  sweets
.
Avoid artificial colors.

Don’t go out alone in the street & do not bump into the frenzied groups or mob down in streets.

Avoid over indulgence in bhang, drinks or food.

Do not drive if you are high on alcohol or bhang.

Time for a giveaway :)

Signs one must note in a relationship